The cannabis plant can be either male or female and understanding its sex is of fundamental importance since only the latter is the one known and appreciated worldwide for its amazing effects and for its unmistakable characteristics.

For this plant, in fact, gender counts a lot because according to its sexuality it plays completely different roles and uses. Discover all the details about its structural and reproductive characteristics and all its different uses.

Before going into details, it is good to know plants can be monoecious or dioecious.  Unlike the reproduc-tive organs of animals, which are permanent structures, flowers are temporary structures which originate seasonally; after fertilization some parts of the flower turn into fruit, a structure which protects and en-closes the seed or seeds, whereas the other parts die and are eliminated. When the different male and female flowers are present on the same plant, as for example in the pumpkin, oak or corn, such plants are called monoecious (in Greek “one house”). In contrast, while less common because in nature the prevai-ling condition in plant species is to recreate both sexes, species in which male and female flowers are found on different plants, such as kiwi, mistletoe, hollyhock, and cannabis, are called dioecious (“two houses”). 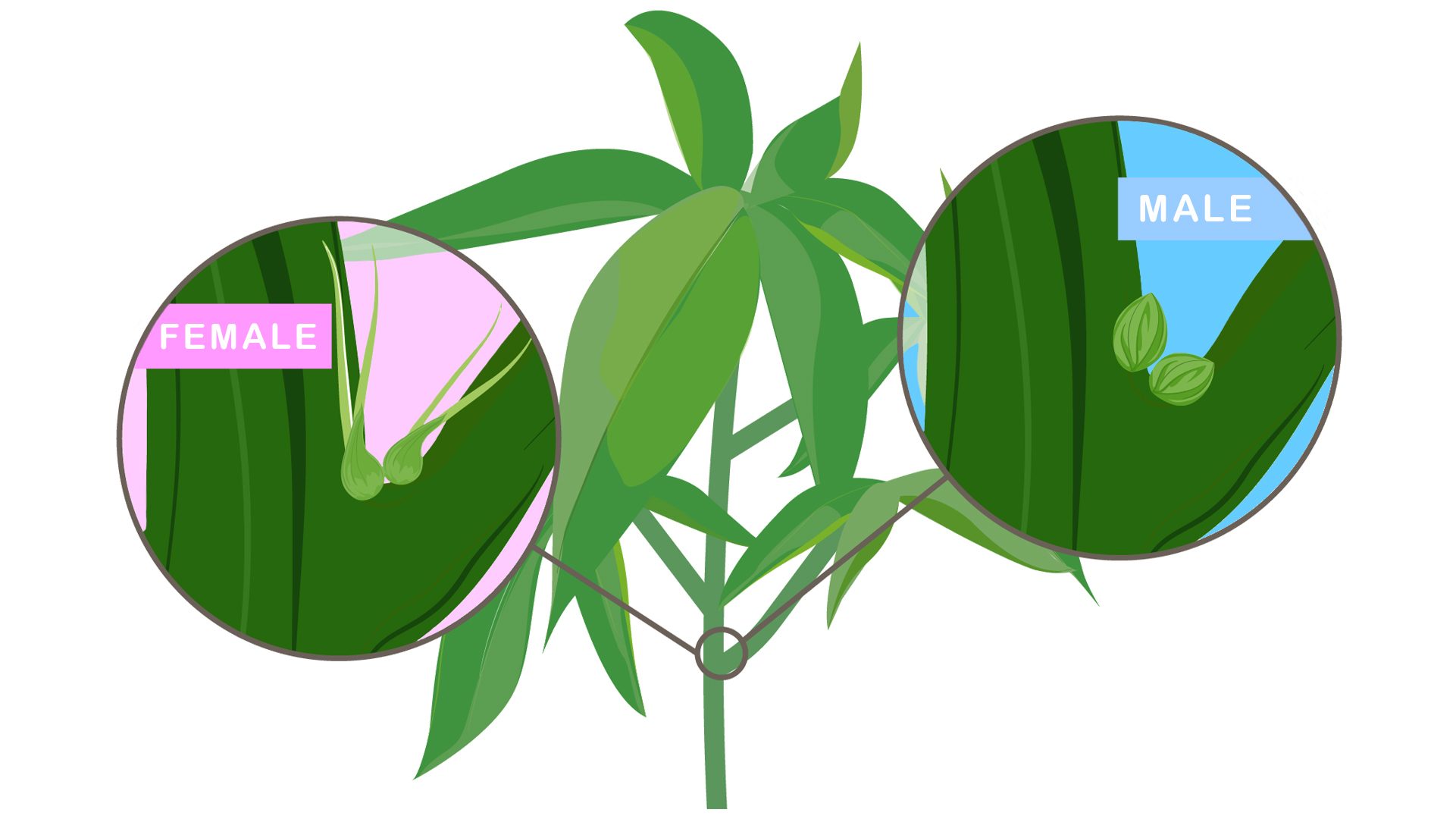 It features the female and male reproductive organs on two different plants (not the same one).

So, cannabis is a dioecious plant that will have male and female reproductive organs on two separate plants. Usually, male and female cannabis plants do not show major morphological differences, except when the male (stamens) and female (pistil) reproductive structures appear. Unfortunately you cannot know the sex immediately, you have to be patient and wait for a few weeks. The cannabis plant goes through two fundamental phases in its growth: the “vegetative” phase, which can also be considered as an infantile phase, in which the plant concentrates only on its growth without taking its sex into consideration. Only from the fourth to the sixth week or so, before the beginning of the flowering phase, the “pre-flowers” are born which will reveal the gender of the plant. After that, cannabis plants move into the flowering phase, or adult stage, which means they stop growing and instead focus all their effort on producing flowers or pollen. To determine their sex, one must examine the point of attachment of the branches and leaves that extend from the stem, called “nodes” on the plants. In this precise point, males produce small sacs similar to grapes which will be filled with pollen and will then release it in the air when they reach a certain maturity. Female plants, on the other hand, develop small whitish hairs which, with time, will turn into long amber colored pistils (between yellow, orange and brown) in order to capture the pollen released in the air by the male. It is good to know, however, that only the latter produces the flowers also used for the creation of extracts, hashish, oils and many other products with a high content of resin and rich in cannabinoids also in the leaves, in the stem and in the stalk.

It shows whitish hairs which will then become long amber colored pistils.

It has small sacs called stamens that will fill with pollen.

There is also the rare case of hermaphroditism, that is a plant containing both female and male sexual organs. These plants can self pollinate or pollinate other females and then give birth to other seeds with the same hermaphrodite genes and for this reason they should be immediately eliminated. The hermaphrodite plant can be the result of seeds with bad genetics or of the so called “Herming out”, which occurs as a consequence of a trauma or an excessive stress that can be caused by many factors including: nutritional deficiencies, high temperatures or lack of light, diseases and damages to plants. Just think that outdoors it is possible that a branch broken due to bad weather could then regenerate and turn into a hermaphrodite.

It features the female and male reproductive organs on the same plant.

In spite of this particular exception, in order for a female plant to produce seeds it is indispensable the presence of a pollinating plant, that is having male flowers capable of producing pollen. However, the cannabis plant is mainly cultivated for its flowers or buds and not for its seeds, so today the most common practice is to grow “seedless”: males are grown separately or discarded to prevent pollination. Indeed, the risk of waiting too long in determining the sex of cannabis plants is that males may pollinate females. This allows female plants to focus their energies only on flower production instead of seed production. In fact, when males pollinate females, they produce seeds in the flowers thus making the end product unattractive and less desirable. It is recognized, however, that plants with male reproductive organs are instrumental in creating plants with new genetics, allowing for constant experimentation and testing of new strains. At the time of pollination, males provide half of the genetic makeup, so it is important to carefully examine and choose these plants based on shape, growth rate, climate and resistance to pests and molds because these are characteristics that will be passed on to future generations. In addition, male plants can also be used for making hemp fibers as they are much softer and more palatable than those from female plants for creating clothing, household items and linens.

Cannabis plants that are pollinated naturally or by traditional methods can produce both male and female seeds and, as with most species, with about an even split between the two sexes, meaning they will be 50% male and 50% female. This means that, despite the patience and love spent in growing them, at least half of them will be unusable, at least as far as growing cannabinoid-rich flowers is concerned. Due to the amount of time and energy spent on cultivation, as well as the economic resources, many growers would like to know in advance if a seed will eventually become a male or female plant, and for this reason they look for more successful alternative strategies. One of them is the selection of feminized seeds that, available from seed banks and more expensive than traditional seeds, are selectively bred to grow exclusively into female plants with a high success rate (almost 100%). However, no one can guarantee for female-only plants; feminized seeds can be an excellent variant to greatly reduce the number of males but without eliminating them altogether. Growers have to be careful at all times as even a few males can pollinate a large number of females (with wind the pollen can be carried across the field) and ruin the whole crop.

Growth stages of a Cannabis plant

From germination to flowering stage.

Another method is to grow clones of the plant, which is a cut (like a branch) made on a cannabis plant that will then be transplanted and grow into a plant itself. This technique will be very effective in saving time and space because unlike seeds with clones there is no germination and it is guaranteed that all cuttings will become female (as long as they are taken from a female mother plant): therefore it will be enough to plant a smaller number without checking them carefully and waiting for their sex to be revealed. A clone has the same genetic composition of the plant from which it was taken, called mother plant and of which clones are exact replicas. For this reason, healthy, hardy and vigorous plants with good appearance and fragrant aromas are selected, as their genetics will be passed on to the clones. The choice of clones is also very important: a robust clone will lead to an equally robust plant. First of all, it is necessary to examine the cuttings and the width of their stem which can already give an idea of their health and vigor; in fact thin or discolored leaves are synonymous with weakness which will make the cuttings more prone to diseases, as well as the presence of any parasites. The mother plant must always and only be in the vegetative stage (it must not have started flowering yet because in addition to damaging the plant itself the clone could turn into a hermaphrodite due to the shock) while the clones are cut. After cutting the clone from the mother plant, it is wrapped with rockwool, which is a molten rock spun into a fine thread with formidable air-breathing and moisture-holding properties, or other equivalents such as peat or foam and given nutrients to encourage root growth. Most clones will be ready for transplanting into the ground in about 10-14 days, depending on rooting characteristics, when the white roots reach about 2.5 to 5 cm in length. Some growers decide to dedicate the mother plant only and exclusively to the production of clones, keeping it always alive and in vegetative phase without sending it to flowering and therefore without obtaining any flower. Other growers use the mother plant first to make cuttings during the vegetative phase and then once it has bloomed the flowers are used; the cut clones will be cultivated and they will be used to make new cuttings before being sent to bloom. Since clones are genetically identical, each generation will be an exact copy of the mother plant. In this way growers can ensure a constant and continuous genetic consistency of their crop: each future generation will have the same quality, aroma and characteristics of the previous clones.

Although it may seem obsolete to talk about gender diversity, man or woman is a difference that matters a lot in the world of cannabis where there is no equality of the sexes, where the preference always goes to the female gender. On the other hand, when a cannabis seed is planted, it is hoped that mother nature will give birth to a female. Diversity therefore exists and being a woman becomes an advantage to be defended.