Where does 420 come from? What is the origin of the term?

But how did it become a worldwide phenomenon from a small circle of Californian stoners? How did this tradition spread?

Its success gradually but inexorably spread from there throughout California thanks to the Waldos’ bond with members of the famous rock band Grateful Dead who had just settled a few blocks from their high school. In fact, it often happened that the Waldos attended their rehearsal room, listened to their concerts and attended their parties during which they obviously exchanged their coded languages, for example, when they would go smoking, they would say “Hey, 420”. Within a few years, the code also begun to circulate among fans of the band, called Deadheads, who in turn helped popularized it in other parts of the state.

In 1990, in Ohio, Florida and Canada, the term “420” was heard and it was seen painted on signs or engraved on park benches. On December 28th of the same year in Oakland, a group of Deadhead was handing out flyers in the parking lot in a hippy atmosphere before a concert and one of them ended up in the hands of Steve Bloom, then a reporter for High Times magazine and now an authority regarding cannabis. On the card he found an invitation addressed to the participants to smoke “420” on April 20th at 4:20 pm as reported in the original message published in the May 1991 issue of High Times: “We will meet at 4:20 on 4/20 for 420 -ing in Marin County, at the sunset point of Bolinas Ridge on Mount Tamalpais”. The goal of the flyer was clear: the desire to bring together as many people who shared the same passion together on one day of the year to smoke together at the same time.

It is thanks to advertising from High Times, for a long time the leading marijuana newspaper, that it has become an international phenomenon that was until then relatively limited to the Grateful Dead subculture. Editor Steve Hager told the Huffington Post that from that moment he tried to build an entire image around 420: from events to the web domain (420.com) thus bringing it into the digital world as well.

Bloom reported his discovery in the May 1991 issue of High Times, which the magazine found in its archives and provided to HuffPost. The story, however, was only partially correct. 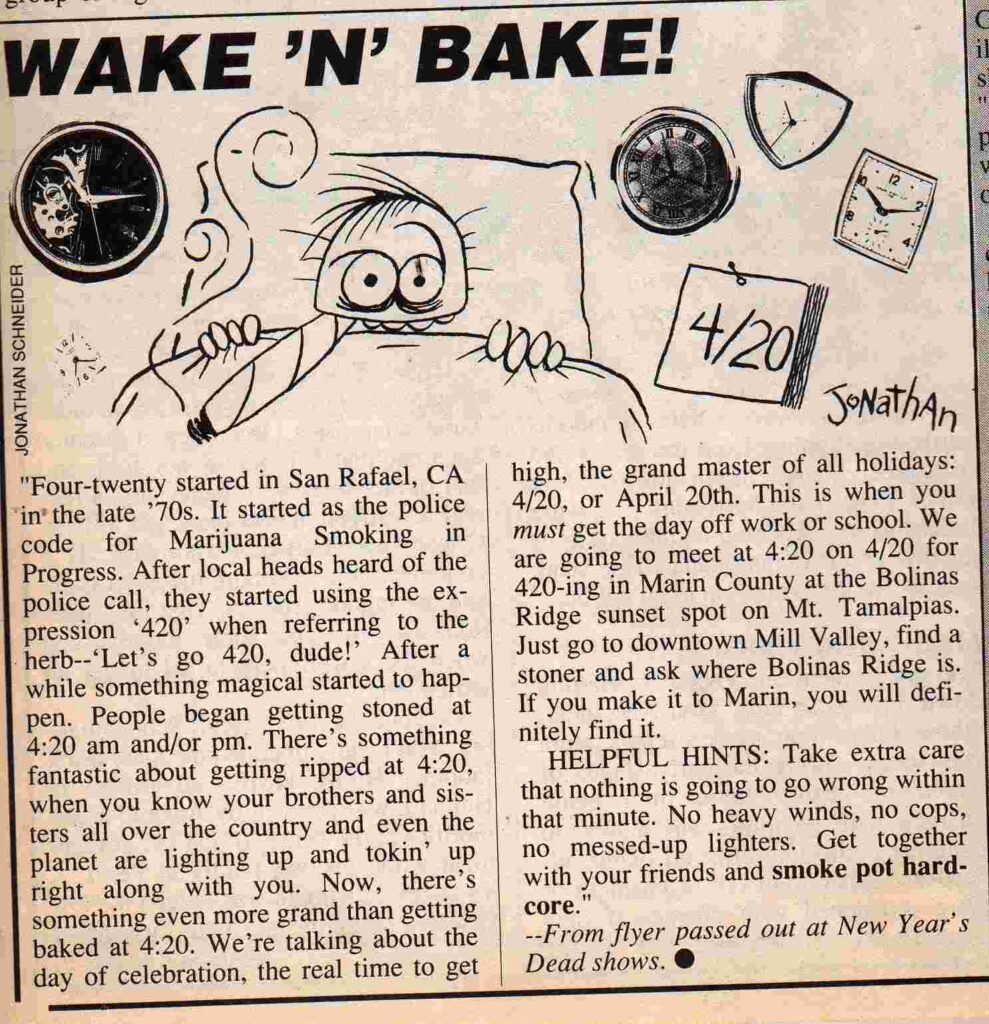 This group of friends made up of Steve Capper, Dave Reddix, Jeffrey Noel, Larry Schwartz, and Mark Gravich, after countless attacks by skeptics or by those who claimed to have used the term previously, decided in 2012 to reveal themselves by making the identity of the boys, previously hidden, known to The Huffington Post. They also decided to find a fundamental proof: the owner of the field who drew up the treasure map, the one who was the inspiration for 420, so that no one could doubt their history anymore. But it was easier said than done. The friend who initially gave the Waldos the treasure map died in the 1980s. Obviously, given the matter in question, namely an illegal cultivation, the search for identifying people with whom he could have had ties was very difficult. Thanks to the suggestion of a HuffPost reader they managed to get in touch with his roommate at the time of the service in Point Reyes and in 2014 came the turning point when they learned of the identity of the man by tracing back to his name – Gary Newman – and his place of birth.

Once arrived in San Jose, they were able to speak by telephone with the man who confirmed his days and his memories as a coast guard. But the meeting also turned out to be much more difficult than expected, so much so that they had to force the Waldos to hire a private investigator who was able to track him down in one of the city’s homeless camps. After years of research and several failed attempts, they finally found themselves, in February 2016, with Newman in a motel and took a trip to Point Reyes, where the soldier remembered his time in service during which he took care the historic lighthouse. On that occasion, he said he planted the now famous marijuana crop on a federal plot of land near the lighthouse and kept the crop until autumn 1971 when, for fear of being discovered, he decided to draw a map to locate the plantation and to donate it to his brothers-in-law, Pat and Bill McNulty, who in turn decided to share it with their friend Steve Capper also known as Waldo Steve and the rest is history.

The Waldos pose with Newman, third from right, outside a motel in San Jose.

“It was like meeting an old friend even though we never actually met.”